We had a brilliant weather over the last couple of days and I’ve decided to go out and take a few shots. I thought I’d experiment a bit with a new technique for me, which is a variant of panoramic shots, except it produces completely different results. This technique or this type of pictures is called little planets.

Halley is a very photogenic station and despite the fact that it’s just flat, white, cold around us, it really is a beautiful place. I’ve been asked by a few people how is it like to be there, and the best answer I can come up with is it’s like being on a different planet. The two pictures below are actually nearly the best visualisations of what it’s like to be here.

To take those pictures, I’ve used my Nikon D60 camera with a Nikkor 10.5mm DX Fisheye lens, on a Manfrotto tripod with a panorama head (the panorama head allows to position the camera in a way that it rotates around the optical centre, as opposed to around the camera body, which helps reduce the parallax effect). Then I proceed to take pictures the same way I would have for a 360° by 180° panorama. The absolute minimum number of pictures required for such panorama is 6 pictures around the horizon (each is taken at 60° angle to the others) plus one picture of the zenith and one picture of the nadir. This, however, doesn’t leave much room for margin and also makes it a bit trickier, especially for the nadir, to remove the tripod from the shot, so I now tend to take the 6 pictures around the horizon, tilt the camera 60° up and take another 4-6 pictures around the sky (either every 60° or every 90°), then I take 3 pictures of the nadir (with the camera facing straight down) rotating it 120° at the time, and finally I take one or two more pictures of the nadir having removed the tripod completely from view and holding the camera manually, as closely to where it was mounted on the tripod as possible. This then means that when I stitch them, I have enough clear shots of the nadir on one layer or another, that I can remove the tripod easily enough.

When taking those pictures, the same rules apply as when making any other panorama:

I typically try to take at least two or three sets of pictures, changing the camera position for each of them, to give me a better choice of the final product.

After having taken all shots, I copy them off my card / camera to my laptop and process them in Lightroom. My typical workflow is as follows:

Ensure that all the above steps are done to ALL pictures making up the little planet or panorama, in equal amounts, to keep things consistent.

Finally, export all pictures into your stitching program (I use Auto Pano Giga, but it is also possible to use a free program called Hugin), run Detect / Analysis and finally set the projection to Little Planet.

Depending on how precise you were while setting up your camera and tripod, you will have either next to no work or you’ll need to go through several pictures aligning them, removing unneeded elements (e.g. the tripod), and so on.

Generate the final image of your little planet and reimport it into Lightroom. At this step I typically use the Stack function to stack all individual images as well as my final little planet or panorama together, and then manually move the panorama to be the top of the stack. You might want to go into Develop settings again in Lightroom with your Little Planet and apply some final touches (I found that as the image is square, applying a little bit of post-crop vignetting makes the sky a bit deeper blue, which is nice. Also, you can do another round of slight noise reduction and sharpening, but DON’T OVERDO IT!

You’re ready to export the image and share it with the world!

PS. Thrown into the mix of things are a few regular shots that I took on the same day.. Although not Little Planets, they still do, in my humble opinion, show our little planet Antarctica quite well! 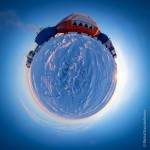 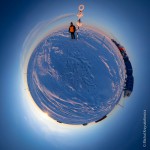 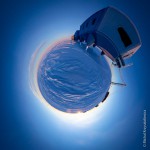