Following up on the success of the Halley Station 360° Virtual Tour, I’d like to present to you another sphere. For a change, I’ve taken this one outside – just a few weeks ago.

One of the main things I’ve heard before coming South for the first time is how beautiful the night time sky is. I have never been to the southern hemisphere before and so I was used to the northern sky. I thought, on a clear night, it was always beautiful.

Southern hemisphere is facing the centre of the Milky Way – unlike the northern one, which looks towards the outskirts of our galaxy. This means there’s a massive amount of stars to look at here – there’s simply no comparison between the two.

At first the southern sky seemed… foreign. I couldn’t recognise any constellations. Everything seemed completely strange, even the Moon was upside down! After a while though I got used to it all. I still can’t name most of the constellations or stars, but at least I recognise them.

This all gave me idea to try and show you how the southern sky looks like when you look up yourself. The panoramic pictures, while brilliant, do somewhat distort the proportions and change the projection, making the effect a bit different to what can actually be seen.

Without further ado, Ladies and Gentlemen, enjoy the 360° view of the Southern Sky, right outside the Halley Station. Be sure to click “Full Screen” too!

360 degree view of the Southern Night Sky at Halley

The interactive sphere above is just one of many possible interpretations of the same set of images. Below you can find some more – one panorama, three different views: 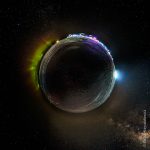