It has been a few weeks since the last update of this blog, again! I’ve not abandoned it though, it’s just that so much has been going on, I really had very little time.

An illustrated update to what I’ve been up to

Some two weeks ago all of the Summer staff have boarded the RRS Ernest Shackleton for their journey back home and since then there’s only the thirteen of us left on station. Immediately we kicked off the first round of Winter trips, but also everyone started settling into the new routine. A lot has happened since the last time and it took me a while to gather my thoughts together, choose all the images, and write those few words.

Instead of writing a very long story, and using the fact that picture is worth a thousand words, I’ve decided to show you a lot of images with some commentary to put those into the right context.

Now that the excuses are out of the way, here’s what happened over the last weeks, in some sort of an order.

Unusually this year, we’ve had three ships calls instead of the typical two. This extra visit was required to bring in extra cargo and some fuel for the Halley VI Relocation Project. The relief went really smoothly and as all cargo with the exception of a handful of sledges of fuel drums came in container, it actually didn’t need many extra hands.

At the same time, the BBC crew came to visit Halley and to shoot a TV documentary as well as to record some Radio auditions.

The ship stayed at N9 for about a week to give the BBC crew time to do their work, and then took them, as well as the first group of summer staff, onboard, to sail to the Falklands and to send them further out on an MoD flight to the UK.

While this was all happening, the base had been running at it’s normal pace for the summer. You could see vehicles out there pushing snow around as part of the snow management work, the field guides doing maintenance of kit (in the pictures you’ll see Al fixing one of the Nansen sledges), and there were a few extra trips back and forth between the Base and the Ship.

A visit to First Chasm

The First Chasm is what we have started referring to as “The Crack”, and which is the cause for the Halley VI Relocation Project. At its tip (the part closer to the station) it has a form of a very long crevasse and which opens up towards the continent into a wide almost canyon-like feature. It has been dormant for several years (we knew about its existence for as long as we had satellite and aerial imagery for the Brunt Ice Shelf, and possibly even longer), however recently it has started to open up a little, where the tip of the crevasse is moving roughly North and the crack width is increasing. There’s no danger to the station, as the crack is several kilometres away, but to avoid any problems in the future, the base is going to be moved to the other side of the crack (with a suitable margin).

We have had an opportunity to visit the crevasse one sunny Sunday, and to abseil into it. It looks absolutely beautiful and we had great crack (pardon the pun)!

It is a tradition at Halley to have a Folk Night sometime in Summer, before the Summer Staff leave. Everyone is encouraged to participate and to give a performance of some sort, with no real stipulation of what the performance might be. People can play an instrument, sing, form a band, tell jokes, read poetry, perform a dance, show a video or a slideshow – whatever artistic you can think of and want to present, you’re on.

At the end of February the RRS Ernest Shackleton came in from the Falklands for the final time this season and brought with it some extra cargo. We had the final relief, brought the cargo to the station, brought all waste and northbound cargo from the station to the ship and after a few days started bringing the outgoing winterers as well as all summer staff to the ship as well, so they can go back home after a long and busy summer.

We had mostly good weather for the relief, although we did get caught in a heavy-ish blow which reduced visibility quite a lot once (which resulted in all vehicles slowing down even further), which was not really that much of an issue as the route is very well marked with flags and each vehicle has a GPS as well. We also had heavy fog roll in one of the afternoons and that actually did stop me for a couple of hours at the half-way point. Luckily we had a Caboose installed at that point, so I could shutdown the machine and make myself a fresh cup of coffee on the Caboose. After a couple of hours of waiting other vehicles joined me and we went back to the station in a group.

During the final ship’s call, the last aircraft leaving this part of Antarctica went through Halley on their way back North via Rothera. We’ve had two Baslers and a Twin Otter on the apron at the Halley International Airport. A sure sign that the winter is about to start.

Just after the aircraft left, the incoming wintering team have been invited to the Ship for a dinner and a night out there, which was really nice. It’s the last time for the next year or so that we will have an opportunity to spend time away from station and not in the field.

After the dinner we brought the remaining Summer staff back to the ship and waved them good bye. See you guys next summer!

A phone call with Tim Peake on the International Space Station

As a bit of a surprise, we got an amazing opportunity and a privilege to talk to Tim Peake, who is a British Astronaut currently orbiting the Earth on his 6-months mission on board the International Space Station. We all gathered in the Comms Office and Tim rang us from the ISS for a chat. We also had a party of three in the field, and we used the HF radio to transmit that chat out to them so they could at least hear everything first hand.

How cool is it to talk to an actual astronaut currently in space? 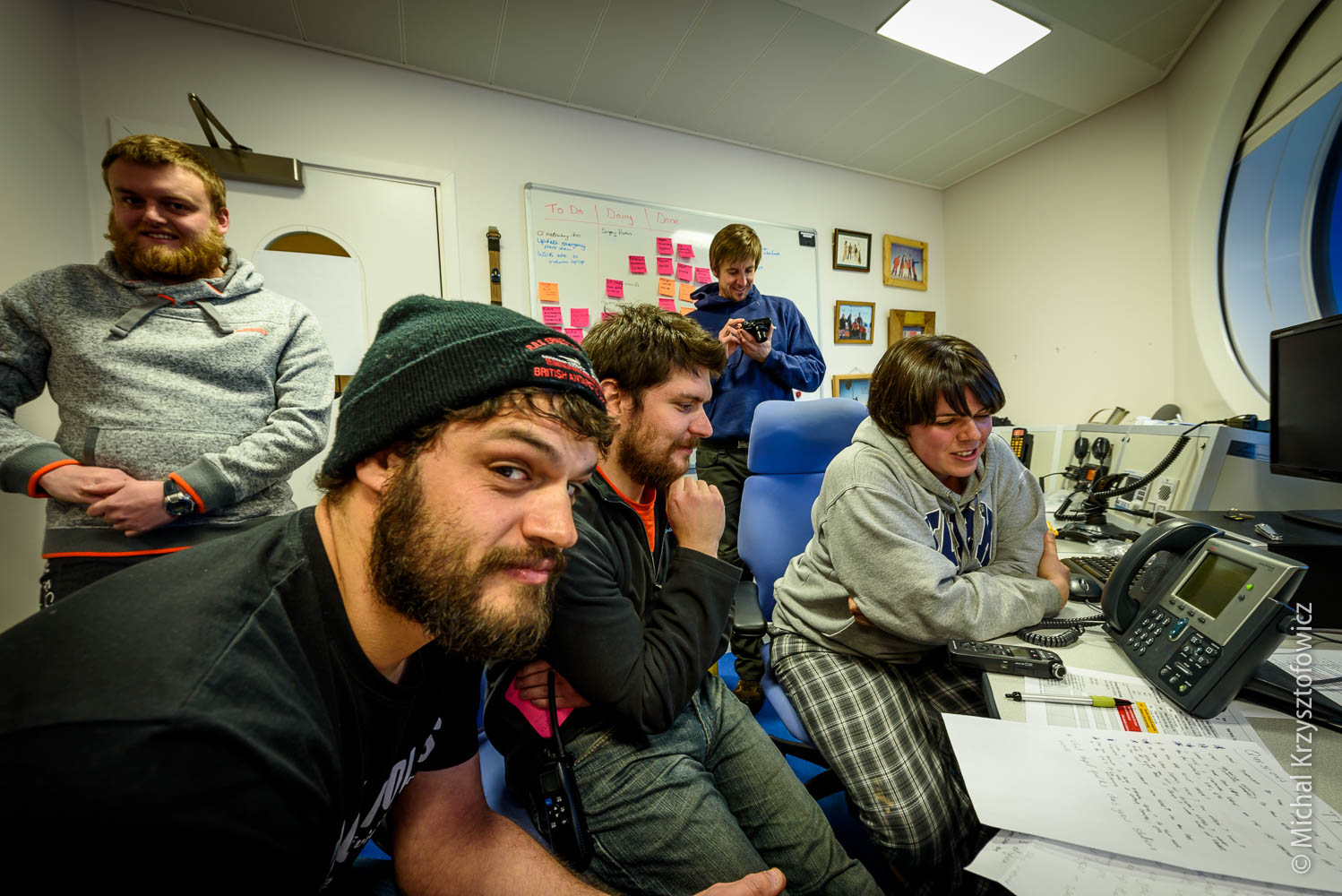 I’d like to finish this article with a gallery of images which don’t really belong to any particular event, but I think they just show the beauty of this place. In February we’ve had our first sunset, which brought with it other colours than just blue and white. We also had the first full moon, we’ve had penguin visits (a few Adelies came to hang around the station for a bit), beautiful halos, light pillars and others!

Finally, don’t forget to check my Antarctica366 page for daily pictures from Halley!

This website uses cookies to improve your experience while you navigate through the website. Out of these, the cookies that are categorized as necessary are stored on your browser as they are essential for the working of basic functionalities of the website. We also use third-party cookies that help us analyze and understand how you use this website. These cookies will be stored in your browser only with your consent. You also have the option to opt-out of these cookies. But opting out of some of these cookies may affect your browsing experience.
Necessary Always Enabled
Necessary cookies are absolutely essential for the website to function properly. This category only includes cookies that ensures basic functionalities and security features of the website. These cookies do not store any personal information.
Non-necessary
Any cookies that may not be particularly necessary for the website to function and is used specifically to collect user personal data via analytics, ads, other embedded contents are termed as non-necessary cookies. It is mandatory to procure user consent prior to running these cookies on your website.
SAVE & ACCEPT
Loading Comments...