As the winter is slowly coming to an end and there’s more and more daylight, it was time to start the second round of winter trips. Unfortunately this time the weather didn’t play ball, so the week turned out completely different than what we were hoping for.

As I was on the first Winter Trip in the first round, it was my turn again to go out first for the second round of trips.

The weekend before trips went very quickly, with us constantly checking the forecasts, setting up the skis, preparing all equipment and packing our stuff. We quickly went over the plan, which was to go to an area called “The Rumples”, which is to the North-East of Halley Station, spend a couple of days over there sleeping in the tent, exploring crevasses and doing a little skiing on the sea ice. After that we were going to go along the coast in the westerly direction towards Windy Bay, in hopes of seeing the Penguins again and to do some ice climbing.

By Saturday we were all packed and ready to go – we were due to leave on Monday morning, although looking at the weather forecasts all weekend, it wasn’t clear we would be able to go – AMPS was predicting 24 knots winds on Sunday night to Monday morning and more importantly up to 40 knots winds by Tuesday night.

Monday has started a week of unreliable and generally bad weather forecasts. Although the conditions outside were marginal and just around our minimum to be able to use the Skidoos and pitch a tent, AMPS forecast was showing even worse. In addition to that, every 12 hours it was changing dramatically – morning forecast generally being a bit milder and the afternoon being a lot more severe for the rest of the week.

We decided to wait and stay local to see if the weather improves (or, indeed, deteriorates). We went out to the perimeter and tried kite skiing, however the wind dropped to around 8 knots at the time we were out, and so it wasn’t enough to pull any of us on the skis.

The wind picked up a bit, although not as badly as it was meant to – for most of the day it was in the region of 15-18 knots. It was clear we wouldn’t be going anywhere on the skidoos, so we decided to ski out to the Wonky Caboose manhauling our kit on a pulk and a Siglen sled. It was fairly cold and the visibility was dropping to 100 meters or less at times, but it was a true Antarctic experience. It was also the first time for me to use touring skis – a little bit awkward at the start, it’s actually quite a good, effective way to travel on snow. I also got the big Siglen sled to manhaul and I think there was around 60kg of load on it (three P-bags and an extra back pack) and it really was hard going. We decided before setting off that one person would pull the Siglen half way and then they would swap with another person there, and thankfully we did.

We spent the night in the Wonky Caboose. The name comes from the fact that it’s mounted on a very wonky sledge (so when it’s being pulled out, it rocks and rolls quite heavily), and also because it’s located about 1km from the perimeter: 1k – one k – wonky.

The caboose is small but very functional, comfortable and once you get the stoves going, very cosy. It is equipped with a big Refleks stove, which produces a lot of heat and provides a constant supply of water (it has a pot on top, which you can put snow into; as we generally leave the stove on for the duration of our stay, there’s no problem with melting snow pretty much constantly). It is equipped with four bunk beds to sleep on, a primus stove to cook and two tilley lamps for a bit more heat and light.

We stayed in the caboose for the night, cooked some dinner, drank a bit of whiskey, played cards and talked about all the important things in life.

We came back to Base around lunch time. The weather did improve a little so the trip back was a little bit nicer. Also, this time round I was pulling the pulk, which is also much easier than the Siglen sledge, so the ski back was actually quite nice! The temperatures were still low, around -30°C with a bit of a wind chill on top, so you really had to be careful as any exposed skin could get frost nip quite easily. This in itself is a bit of an issue, as you have to wear sunglasses and a face mask. Wearing the face mask causes your sunglasses to fog up very quickly, however if you don’t wear the mask, it gets really cold in your face really quickly. Equally if you choose not to wear your glasses, it’s very bright and you could get snow blindness!

The morning was really bright and sunny, however the wind was a bit high and the forecast was actually quite bad again predicting a minor blow. We thought we’d give it a go with the Skidoos to the caboose in Windy Bay – if the wind came as predicted, we could just weather it out there. Unfortunately, we only managed to get two of the Skidoos running. With the conditions marginal, and with the issues in starting one of the Skidoos, we decided, again, to stay local.

I took the kite out again, but as luck would have it, as soon as I went out, the wind picked up a little – just enough for the kite to try to kill me. Good job I didn’t put the skis on, as that would have ended in tears!

Our week was slowly coming to an end and the weather still didn’t really improve. Friday was a very clear, sunny but cold day with a bit of a breeze – quite deceptive actually. We decided to just ski out to the Wonky Caboose and stay there for the rest of the day, and to come back on Saturday.

This time we were skiing out light, with Al just driving a small Tundra skidoo out there with a flatbed sledge, carrying the load, which made it for a much nicer experience.

We got to the caboose, fired up the Refleks stove and got the caboose ready. We then went out to practice some rope work: crevasse rescue techniques, with some added problems to solve. It was cold and at times it was a bit more difficult to focus on task because of that, so in a way it was quite a realistic exercise.

In the evening we cooked some dinner, played some cards and talked a bit, after which we went out to look at the night time sky. There was actually quite a lot going on, with a bit of aurora, a small amount of day light glow from below the horizon to the South West and a lot of stars. It was nice to be away from the station and the light pollution it causes – I think this must have been the clearest sky I’ve ever seen!

We’ve spent the whole day in the caboose and it was a nice, lazy day. Again, we talk a bit, drank a lot of tea and coffee, read a bit and generally enjoyed some down time.

We came back to base after dinner, finishing our week long trip that wasn’t.

Following you can see our track, as well as some of the pictures I took during the week. 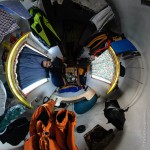 2 thoughts on “Winter Trip that wasn’t”